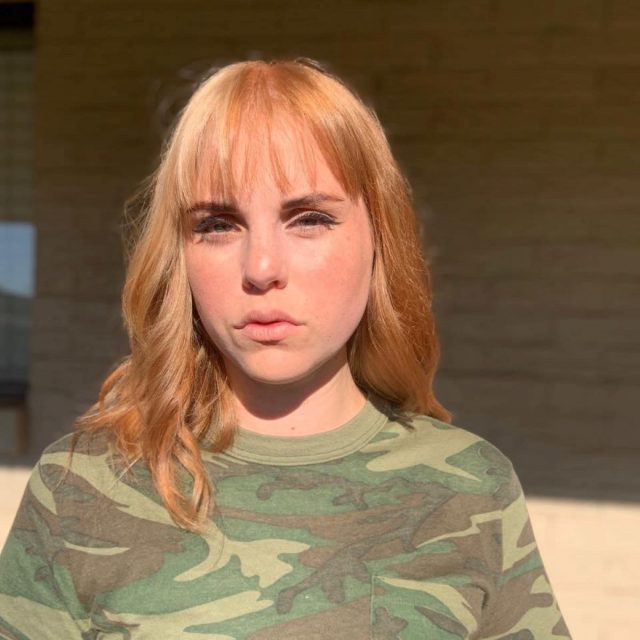 Birmingham Museum of Art’s fall ReFRAME Party kicks off a new season on September 29 with an array of events visitors will find at their fingertips – literally.

Nicola Walls, a nail artist in the Birmingham area, will be a part of the celebration that includes new exhibitions, a deejay with global beats and LED artistry. It all begins at 5 p.m.

With all of the excitement, Walls said the party is going to be a “really fun, experimental, weird evening.”

She’s looking forward to putting her self-described “pop art” style on display which has included   inspiration from places other than nail salons at which she’d spent her time.

“I got a lot of my inspiration for what I kind of wanted to be doing from what I didn’t see and what I didn’t have available to me in Birmingham at the time until I found the salon [SoHo Nails and Spa in Homewood] I’m at right now…but I would gather inspiration from Instagram, from these salons across the country that were doing the most fantastical nail art, and I was like, ‘I could do that,’” Walls said.

Walls said she learned about the ReFRAME Party because some of the curation staff at the museum would visit SoHo Nails.

“They come in to get their nails done and we do funky, crazy nail art on them, and I think they just kind of saw it and were like, ‘This would be a fun thing,’” Walls said.

Walls has done a little of everything. She previously worked as a janitor, bartender and veterinary technician. Nail art is something she picked up in the last two years, even though much of her learning came from hours spent in nail salons, watching technicians, she said.

“Being a bored customer in a nail salon, you kind of watch what you can, so I just learned a lot from getting my nails done myself, and then most of [what I know] was self-taught,” she said. 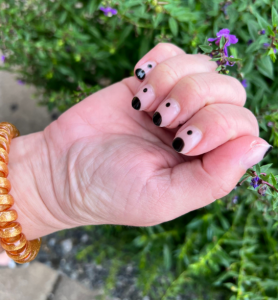 Her first foray into nail art was using press-on nails, which are artificial nails with polish pre-applied that anyone can glue onto their own nails. As she started practicing doing art herself, she also began giving out “free” manicures to friends for donations.

“[The manicures] were not really free, but they were donation-based, and I used that to kind of get my supply up and all my tools together and then just turned and burned out of the house until I had a little bit of a portfolio to bring into a shop,” Walls said.

From there, Walls said, she tested out various salons in and around Birmingham to see where she could fit in.

“I went to these salons, and I got my nails done before I asked them about apprenticeships or showed them my portfolio, just to kind of see how they converse with clients,” Walls said.

She ultimately secured an apprenticeship at SoHo Nails and Spa, where nail artists treat clients with care, she said. Talking with clients is an oft-neglected part of the job, she added.

“There’s a huge problem in the nail world of clients feeling like they aren’t able to accurately communicate what they want because they don’t necessarily know the proper terminology, so to able to sit down and be like, ‘Let’s talk this out. Let’s figure out what you want to do…all the nitpicky details of it. Let’s talk about it before we do it,’” Walls said.

Through the apprenticeship, Walls said, she put in 1,200 hours with the shop over about eight months.

One aspect of the job that “delights” her is being able to give someone their first nail art experience. Sometimes, first-timers need a little convincing since they may be unfamiliar with the style.

“They don’t know that they want it because they’ve never seen it. A lot of people don’t have that niche Instagram feed that’s giving gel nail art all day and all night, so I think that exposing more people to it and also getting the nails out there in the wild, that’s been the best tool that I’ve had at my disposal,” she said.

In addition to the art itself, Walls said conversation with clients is something else she really enjoys, especially given her recent work on the Two Blunt Broads Podcast.

“My latest hobby is podcasting and researching for podcasts…so getting to have this wealth of weird information in my head and sitting with someone that is an unwilling participant in my conversation, and I can just force them to whatever we’re going to talk about,” Walls said.

Walls, 29, grew up between Huntsville, AL and Columbus, SC with two older siblings, Joe and Lauren, and her parents Judy and Allan. Though she has siblings, they both left home for college while she was in middle school, meaning she also got some of the benefits of being an only child.

Walls first moved to Birmingham at 15, when she became a boarding student at the Alabama School of Fine Arts (ASFA) downtown.

Though she doesn’t write as much these days, Walls said the underlying message of following one’s passion that she got from ASFA remains part of her.

“One thing that the School of Fine Arts was really like hellbent on when we were there was passion and finding a life led with passion, and I think that really got ingrained in me from an early age,” Walls said. “If you don’t love what you’re doing, if you don’t like doing every minute of it, then why are you doing it?”

The Birmingham Museum of Art ReFRAME event will kick off the museum’s fall season of programming on Sept. 29. At the party, three new exhibitions will be opened, and BMA staff will give three separate art talks.

Also during the party, local deejay Andrea Really will be playing, while Walls does nail art in the lobby, and performers from Luminarts Entertainment will circulate throughout the galleries with “LED artistry.”

The ReFRAME is presented by Medical Properties Trust.

Explore three new exhibitions along with the rotating permanent collection.

Enjoy a work of art right at your fingertips! Nail artist Nicola will be transforming guests’ nails with work inspired by our collection. Wedgwood blue nails, anyone?

Ready to light up the night are performers from Luminarts Entertainment, who will be circulating throughout the galleries with LED artistry.

Become enlightened by our newest exhibition Hand-Held: The Four Seasons in Chinese Painting, with a talk by exhibition curator and Curator of Asian Art, Dr. Katherine Anne Paul.

In this exhibition, artists examine the many meanings of ‘light’ and ‘play’ through medium, expression, meaning, and form. Light Play brings together contemporary artists and works exploring the manipulation, effects, and emotions of light, including the double meaning of the word ‘light,’ by featuring works that are lively or humorous in subject matter. Together, these works reflect the expanse of contemporary artworks incorporating light. Whether using it literally, metaphorically, or conceptually, each artist radiates the profound influence of the power of light.